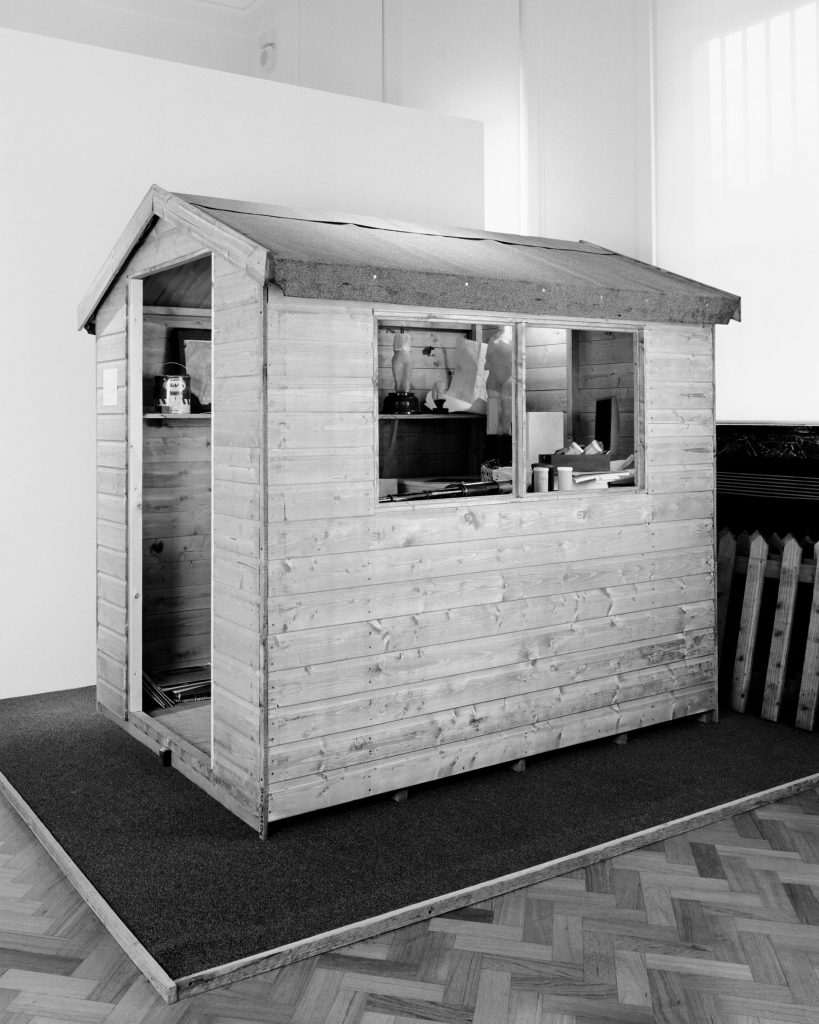 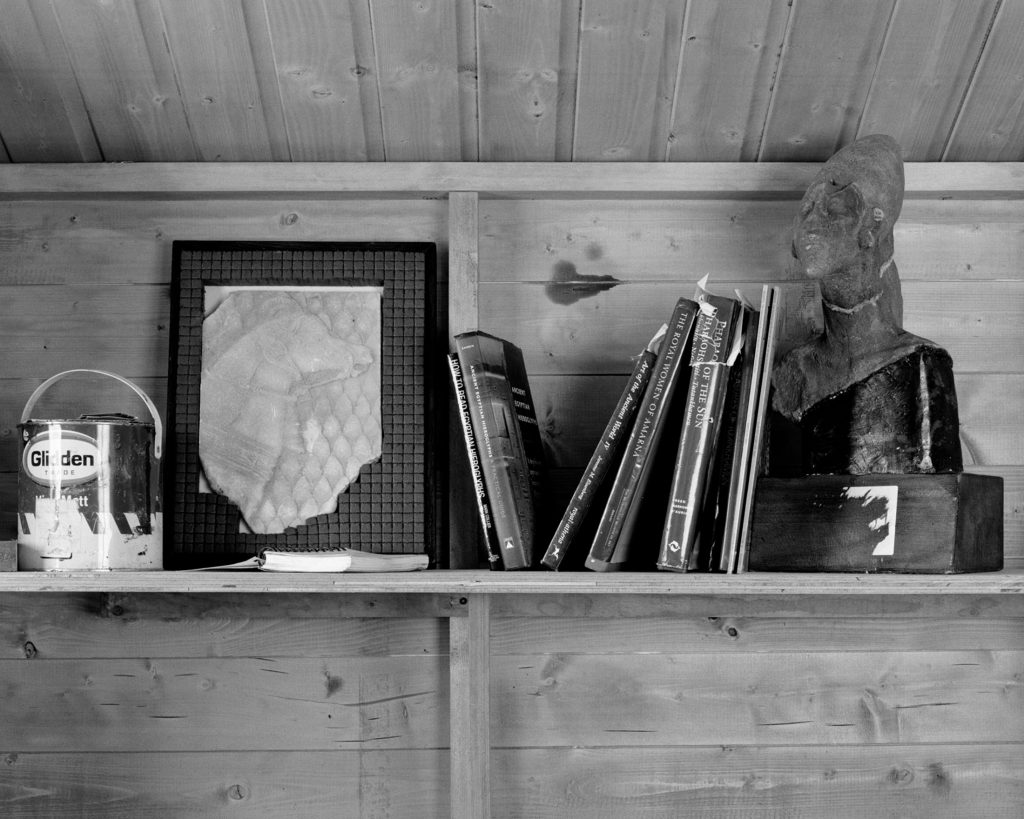 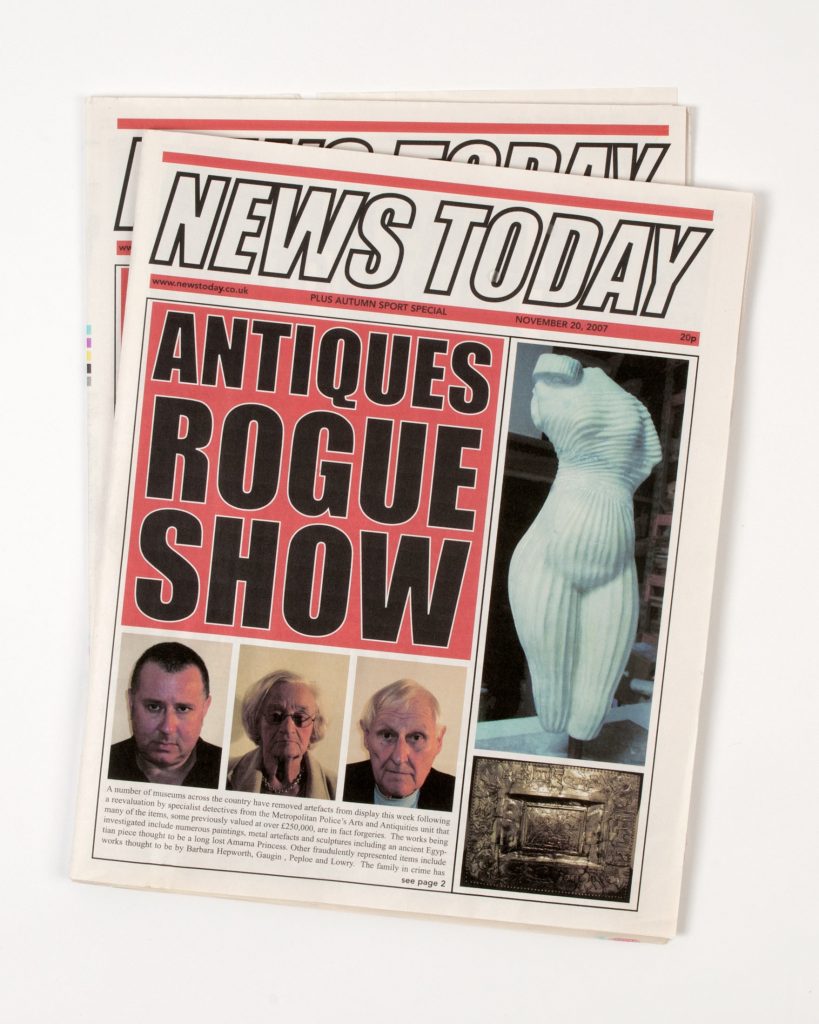 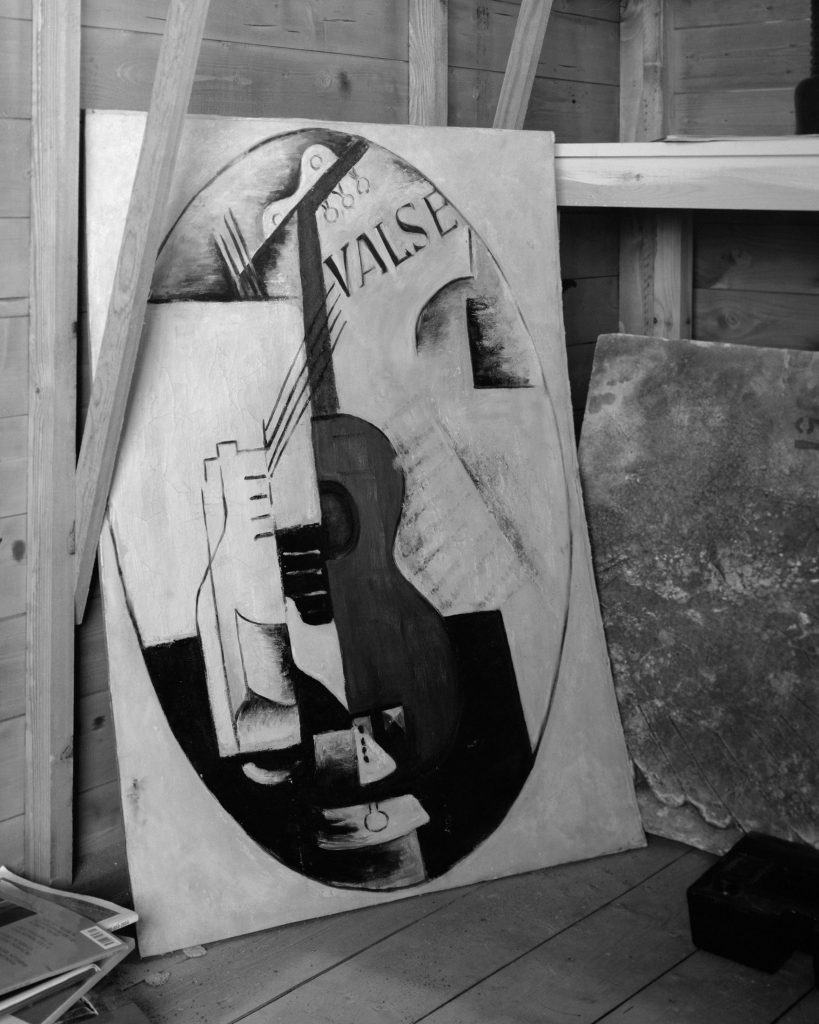 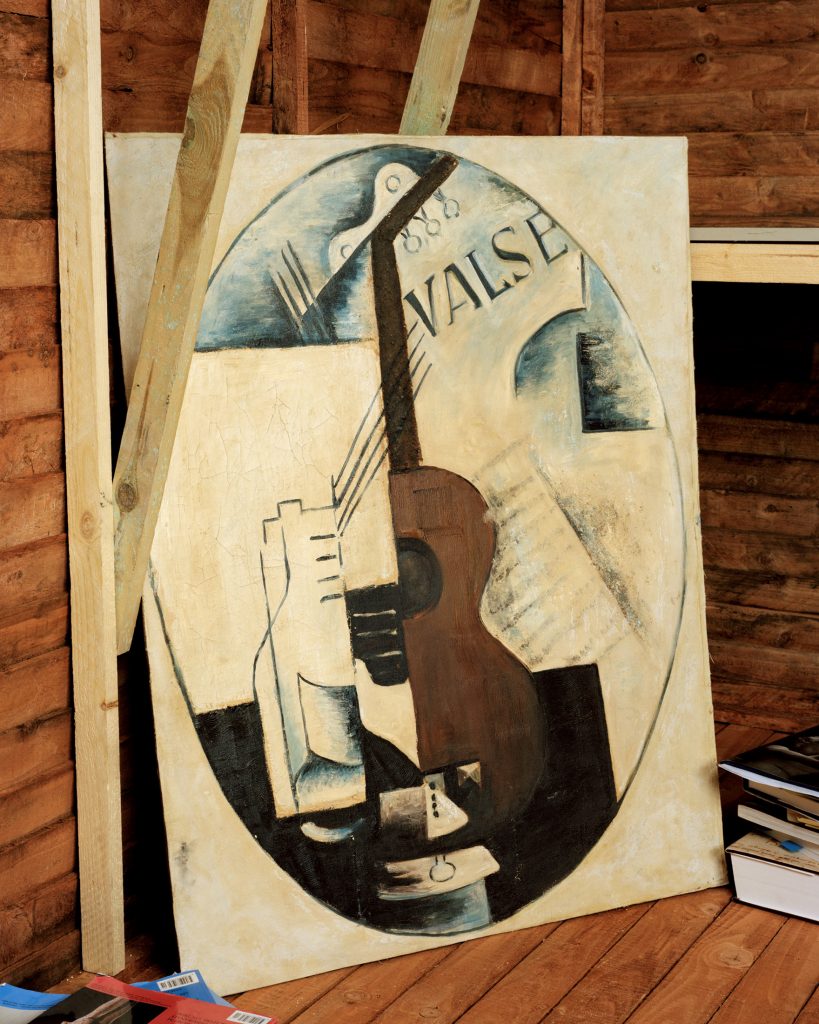 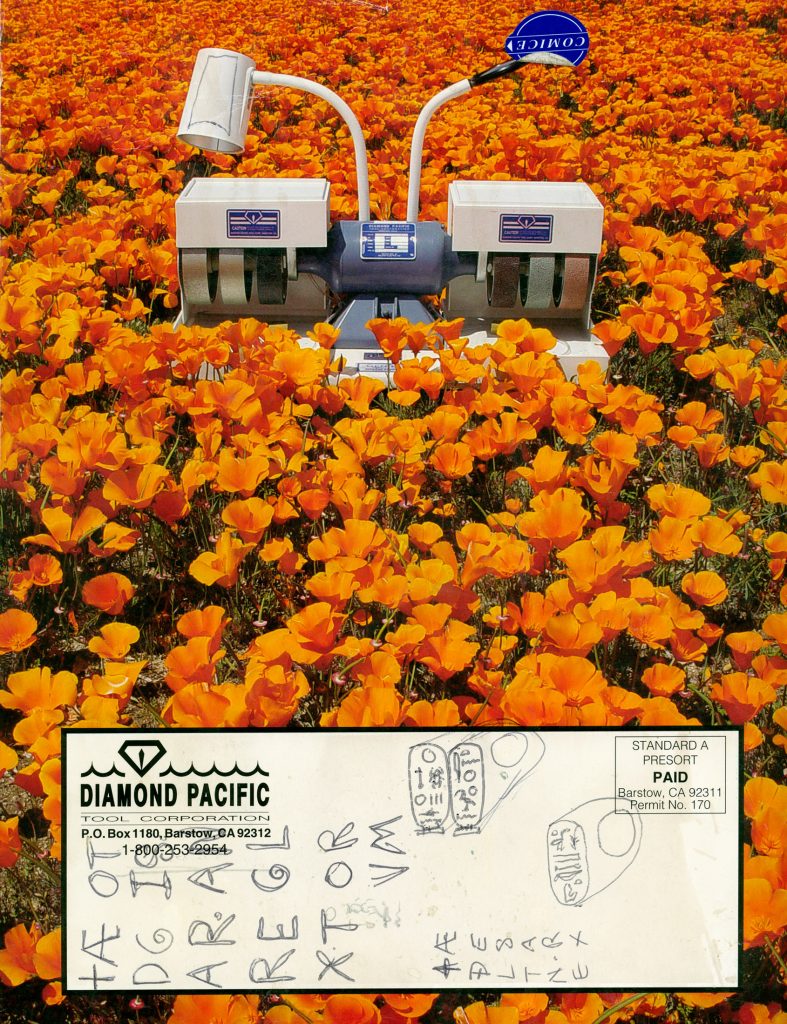 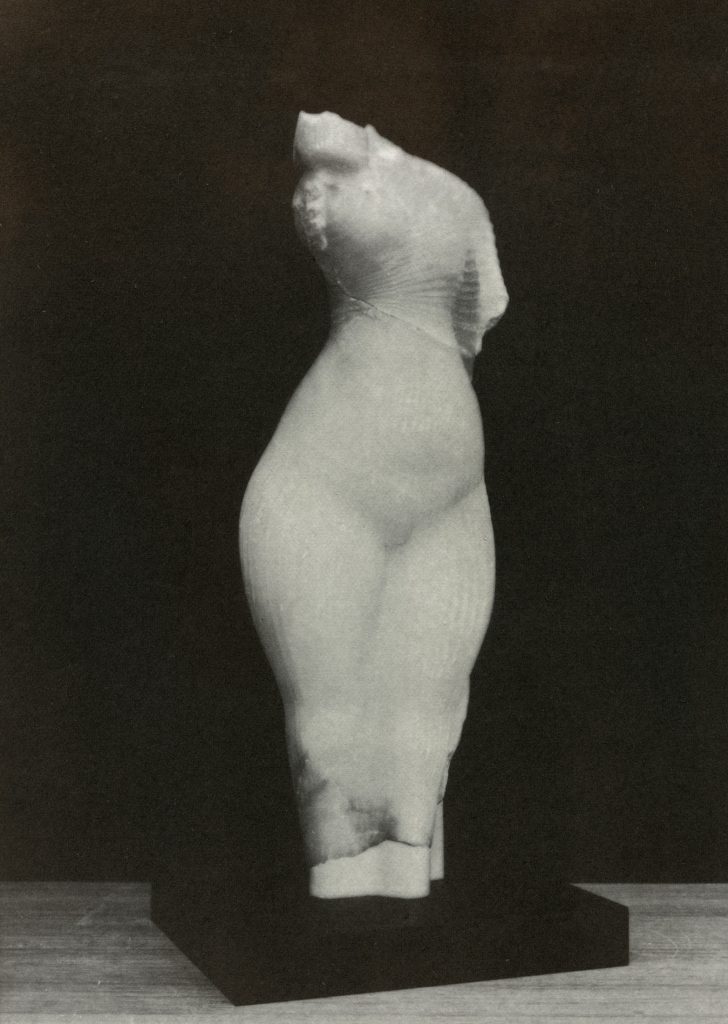 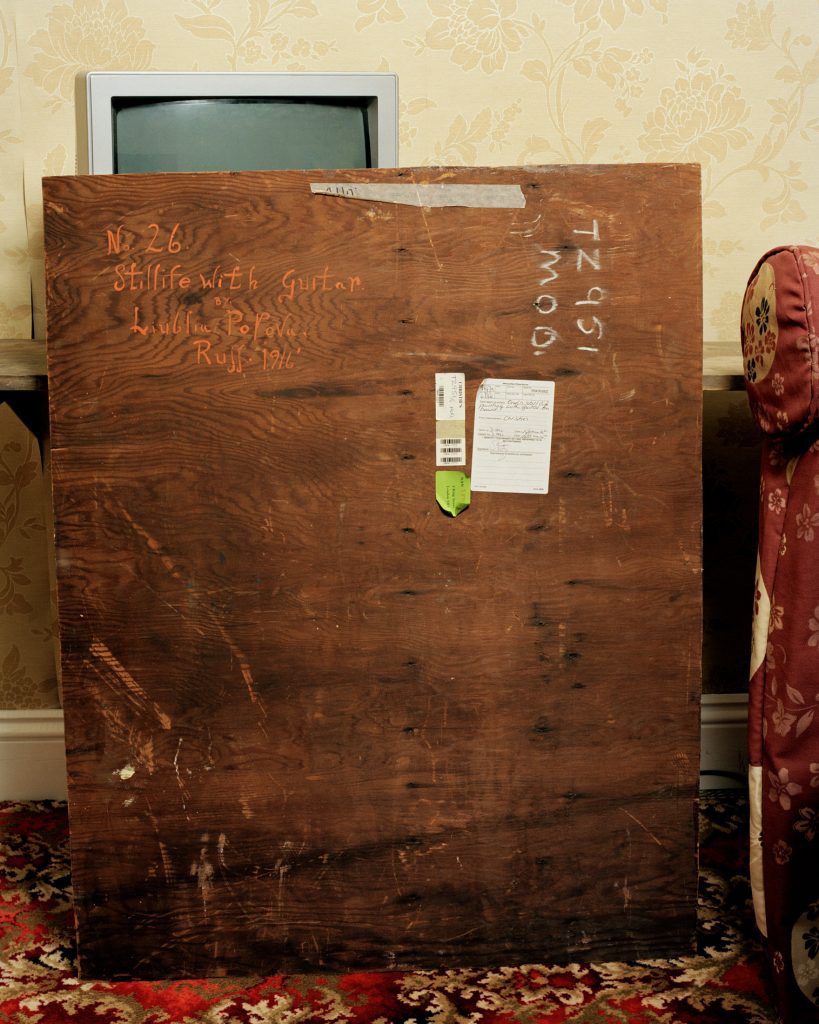 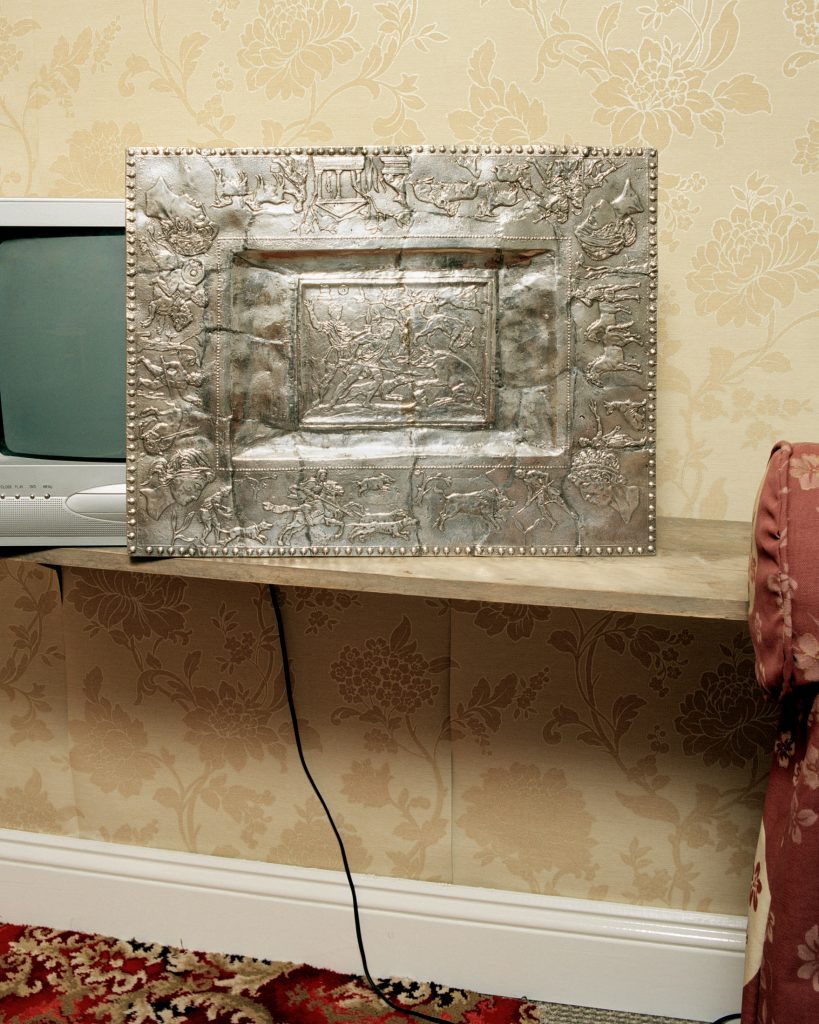 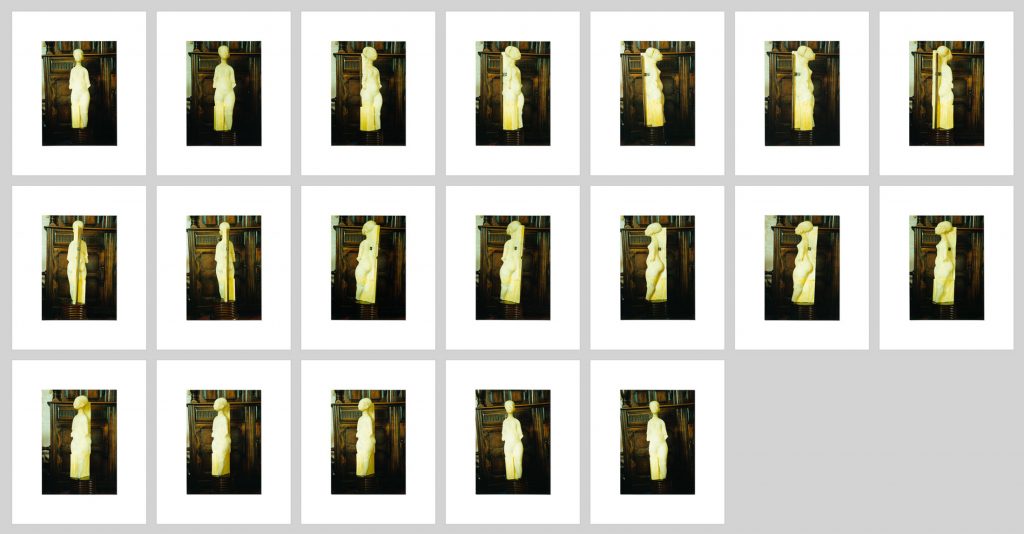 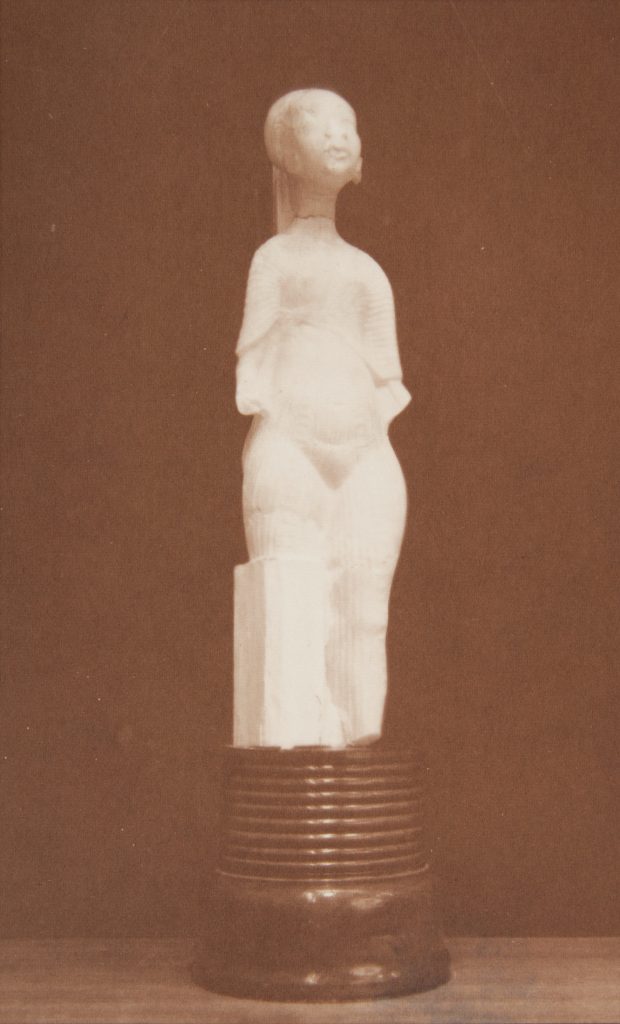 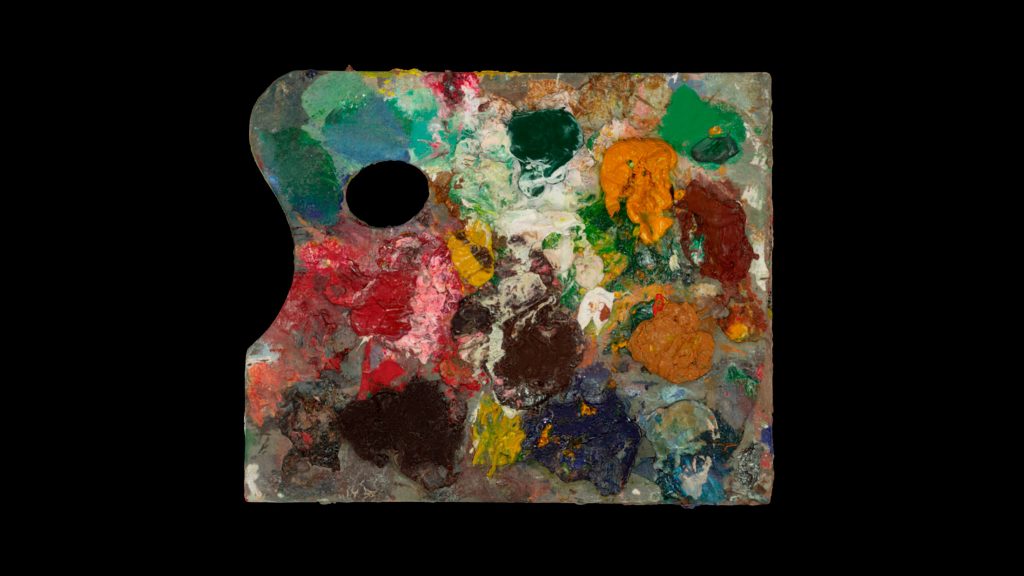 Sarah Pickering’s Art and Antiquities, an ambitious installation comprising photographs and objects, saw her sustained negotiation with slippery notions of authenticity take centre stage. The project was commissioned for Locate, an exhibtion of works developed in response to real or imaginary sites by the Jerwood Foundation, then later expanded and shown at Meessen De Clercq Gallery in Brussels. The site Pickering took as her starting point was, in fact, another exhibition: The Metropolitan Police’s Investigation of Fakes and Forgeries (23rd January-7th February 2010). Held at the Victoria and Albert Museum, this unusual event showcased the Art and Antiques Unit’s own investigative prowess in a presentation of faked artworks and information detailing the means of their detection. The unlikely star of that show, and already the subject of two separate BBC television broadcasts, was the notorious and then incarcerated art and antique forger, Shaun Greenhalgh.

In appropriating Greenhalgh’s most infamous forgeries from their museum context, Pickering engaged a curious (and variously re-constructed) narrative; that of a man who, together with his inspired elderly parents, deceived scores of specialists with sculptures and paintings created in his garden shed-cum-studio in a council estate in Bolton. The images and objects she presented in the gallery resulted in part from research conducted at and facilitated by Scotland Yard’s fakes and forgeries archive, where the fakes presented in the V&A show are permanently stored. This source was particularly visible in a grid of nineteen scanned minilab prints of amateurish photographs of a forgery, its masterly rendering shown from all different angles propped in a brown living room. The pictures were apparently used in the first instance by the Greenhalghs for valuations, but in this context their copies were framed and displayed on the far wall of the gallery. With their casually staged subjects and curled corners (a result of the scanning process) contradicting the uniform, white frames and meticulous hang, these prints also retained something of their status as evidence. In this respect, they set the tone for the installation as a whole, indicating Pickering’s appeal to her viewers’ sleuth-like curiosity.

Turning on conventions of appropriation advanced by artists such as Sherrie Levine and Louise Lawler, this sleuthing was directed towards the criminal but also art historical veracity of the objects represented in the gallery. As well as invoking the crime scene, Pickering’s installation as a whole aped the formal language of the museum display. For instance, two sculptural versions of the Amarna Princess, a Greenhalgh sold to the Bolton Museum as an Egyptian antique for £440,000, were shown side by side on white plinths under perspex. If the improbable doubling of the bust shown in differing states of completion sabotaged its (singular) reality, then a glance at the labels confirmed any suspicions. Indicating as their likely provenance the BBC props department, this text at once undercut their presentation as sculptures and brought television and the BBC itself into the picture, as yet another, popular, but nonetheless authoritative, site of representation.

A portentous velvet curtain hung on the wall directly opposite these two figures shielded a salt print, a further representation of Greenhalgh’s original fake. Attributed to an “Unknown Photographer”, this photograph of the Egyptian Princess was Pickering’s most fitting homage to the forger. With its fragile materiality emphatically staged, the Calotype process -the earliest positive printing technique, developed in the mid-nineteenth century by William Henry Fox Talbot- gave credence to the print’s alleged date of 1852-60. An astute viewer might also have recognised the correlation here with Roger Fenton’s brief but prolific photographic career, those being the precise dates during which he documented (amongst other things) the British Museum’s collection of antiques. The gallery caption, meanwhile, informed us that this particular photograph was on loan from the V&A. As well as further insisting the work’s antique status, this detail recalled the Greenhalgh family’s ruse of smuggling documentation into library archives to verify Shaun’s work. A fake enmeshed with another, Pickering’s salt print augmented the Greenhalghs’ historicisation of their Amarna Princess, not to mention the mythification of family itself, all the while depending on our doubt to achieve its cogency.

Pickering’s work often turns on photography’s ambiguous relationship to the real. On the one hand, the indexical veracity of her photographs insist that what we see (now) was really there (then); on the other hand, her uncanny subjects urge us to question the conditions of their framing. Her decision for this work to present The Faun, falsely attributed to Gauguin, via its reproduction in six separate fine art catalogues did more than convey the reach of Greenhalgh’s trickery; it also undermined the very processes and structures by which authenticity is established and maintained. Almost a century ago, Walter Benjamin observed that, with mechanical reproduction, the aura associated with the ‘original’ art object is radically superseded by the political. By showing art as already corrupted by its transmission via reproducible media, Art and Antiquities reinvigorated Benjamin’s suggestion, and intimated the reach but also the fallibility of authority more broadly.

This understanding of the arts as socially and politically inscribed has surfaced in earlier works, not least Public Order (2002-5). The first of Pickering’s projects to engage the authorities, this series of photographs witnesses sites of police riot-training. In their description of eerily vacant streets, lined only with building facades, the images simultaneously expose and destabilise the state apparatuses for maintaining civil order by lifting the curtain on the scene of rehearsal. In Art and Antiquities, Pickering employed reenactment, rather than the rehearsal, to defamiliarise and so reveal usually imperceptible mechanisms of power. This shift in emphasis is apt given the photograph’s always-past tense (albeit a past deferred to unknowable, future viewers), and as such permitted greater reflexivity, not least in enabling Pickering to implicate and problematise her own working processes and status as Fine Art Photorapher.

Both the BBC dramatisation, which reconstructed the making of the Amarna Princess, and the subsequent reframing of (we assume) their copy of that sculpture within the salt print, can be understood as attempts to resurrect the forger’s imitative processes. Further efforts to access Greenhalgh’s experience through reenactment were subtly dramatised by Pickering in a series of silver gelatin and C-type digital prints. Amongst these were two photographs of a cubist still life painting artfully propped in a wooden shed, the black and white image more sympathetic to the historical claims of its subject than the image in colour, but otherwise at first glance the same. On closer inspection, however, several clues -a stack of books that was not there before, the wood knotted differently from one picture to the next- disclosed the distinct and therefore the sequential relationship of one set-up to the other.

In fact, Pickering’s reconstruction was indebted to the Metropolitan Police’s decision to display Greenhalgh’s work in a cleaned-up version of his studio, and thus authenticate the experience of visitors to their Fakes and Forgeries display. In supplementing this decision, her photographs pointed up its absurdity. Not only did their reconstruction imbue the scene of the crime with the aura of originality (I was reminded of Paolozzi’s ‘studio’ installed in the Dean Gallery, Edinburgh) but it also implied that some deeper truth, or perhaps the past itself, might be accessed through reenactment. What, then, of Greenhalgh’s own attempts to reactivate the past?

If his sculptures and paintings were illegitimate, this evidently had little to do with their appearance, after all the family’s meticulously researched and executed activities remained undetected for seventeen years. Nor could it simply have been because of the works’ ultimately dubious authenticity (the Greenhalghs’ careful deceptions were finally undone by a spelling mistake in an ‘Assyrian Relief’). Indeed, Pickering’s installation demonstrated the extent to which reenactment -whether police reconstruction, tv dramatisation, literary citation, or (recognising herself as involved) photographic representation- is legitimated within social and cultural relations. The problems arose, she quietly insisted, with the transgression of market forces. Whilst her own acts of appropriation were presented courtesy of her gallerist, Messen De Clercq, Greenhalgh’s activity was never sanctioned, and as a result he was eventually sentenced to four and a half years.

Of course, the Greenhalgh family were undeniably guilty of fraud; of knowingly committing acts of deception for financial gain. Nonetheless, situated in relation to various institutions -police, media, museum, gallery, art markets- for regulating visual culture, Art and Antiquities prompted us to reflect on art and its structures as active and involved in broader distributions of power. After puzzling the ‘actual’ status of Pickering’s appropriations, as reproductions of former art objects since denounced as forgeries, two thoughts persist. First, what is really at stake -for artist, audience, wider society- in making and, crucially, viewing objects that have been designated as art? (To be sure, my role as writer, here, is also implicated in this question.)

And the second? With his release from prison just a fortnight before the opening of Locate, it will be interesting to see whether Shaun Greenhalgh’s notoriety has afforded him that elusive mark of authenticity: a market value all his own.